BEAT is missing, so guest commentator Abby Denton has joined us for the night as we raid a Mako Reactor.

12:00 – Apparently there is a Lupin III Sega Saturn game. It’s not Fighter’s Megamix, though, so that is a point against it.

21:00 – This dungeon is mostly a throwback to Final Fantasy 7’s initial “bombing run” level. That said, if you were expecting it to end with a FF7 cameo, or something from its extended universe (Shelke is apparently still here), you’d be disappointed, as the finale features the Black Mages. Er… to be clear, that is the black mages of Final Fantasy 9, not the musical group.

26:00 – More anime that is weirdly CG-based, while we discuss Plumed Knight during one of the few chapters where she doesn’t appear.

What actually happened in the plot: After regaining their powers thanks to irrelevant Dirge of Cerberus Guest Character Shelke, the twins venture through a Mako Reactor (which, incidentally, is later named by Edgar as a discovered, unknown technological area called “Midgar”). Apparently the reactor is being protected by a group of black mages led by Vivi. After attempting to capture Vivi in a pokéball, Vivi “awakens”, and then leads his black mage buddies to destroy the reactor. This frees Figaro, which leads to King Edgar offering his thanks and an apology for the whole “tossing everyone in a dungeon” thing. Vivi was also apparently holding onto the Earth Key, so now we’ve got half the necessary elemental macguffins in this world. We’re told the next key should be past the Big Bridge, so we head off there after Bahamut makes an ominous, split-second appearance.


1:46 – Eiko appears, and she introduces a bridge that is fairly big. It’s apparently this world’s Alexander summon all bridge-ified, so I guess we should be thankful we get a summoner that is at least marginally related to Alexander’s big Final Fantasy 9 moment.

5:40 – Some great animation here right before the second summoner in this game gets kidnapped while the heroes aren’t paying attention.

15:30 – GIG-AN-TAUR!… is at least something to brighten up this boring dungeon. It’s a straight line from toe to tip.

26:00 – Let’s talk about the Super Mario Bros movie while nothing happens and I get lost. Apparently I was supposed to trigger a cutscene somewhere up at the top of the bridge, but I missed that, and now I’m stuck wandering around like an idiot. This happens a lot this night.

34:00 – fanboymaster provides a detailed explanation of How Final Fantasy 7 hidden characters could have worked. I for one welcome a Yuffie that is impossible in every way.

45:00 – Abby explains that she was the person who originally named all the Pokemon. This story may or may not be accurate.

55:00 – Talking about voting opposite Gilgamesh showing up. Will we be streaming on election night? I have no earthly idea. (Spoilers from the future: nope!)

What actually happened in the plot: The Big Bridge was apparently summoned by a jiant some time ago, so that’s probably another oblique reference to the mysterious and missing mother of the twins. Eiko is keeping track of the bridge, but Plumed Knight (who has some enigmatic connection to mirages) fights and kidnaps the tiny summoner. As a result, the twins have to cross the bridge on foot, and they meet Bartz, who is searching for someone who is posing as him. Apparently it’s Gilgamesh, and he’s not so much posing as Bartz as just shouting “Bartz!” over and over again while causing mayhem. Did people think he was a Pokémon? Regardless, Gilgamesh is banished from the bridge, Bartz retires to parts unknown, and the team moves onto a dark area that hopefully holds the next key.

You know, when I yelled at Gogglebob to let me do this one, I hadn’t realized that the video was an HOUR AND A HALF LONG WHAT THE FUCK GOGGLEBOB WE TALKED ABOUT THIS OH MY GOD.

00:00 – So I haven’t watched the prior two videos and only caught enough of the stream to get SUPER PISSED OFF at the idea of Funko Pops Fucking, so I’m not 100% sure on how the anime teens found a train to Halloweentown. I’m just gonna roll with it.

01:00 – Up till this point, both Anime Teens have been completely devoid of anything resembling personality, so it’s kind of equal parts refreshing and shocking when the girl completely loses her shit and swears one thousand times revenge on the Halloween train’s Cactuar Conductor. 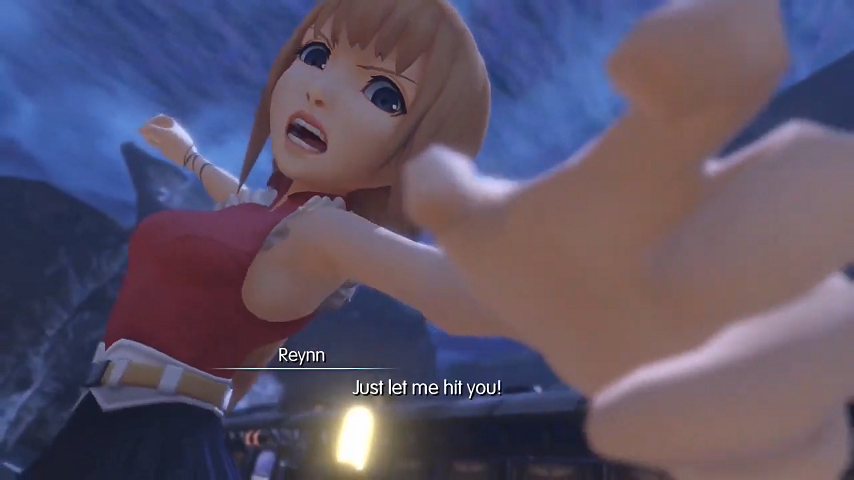 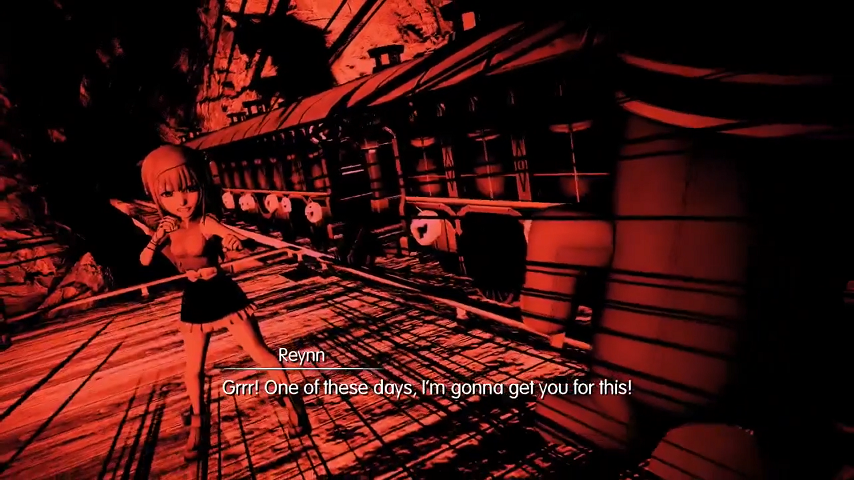 And like, it comes out of literally fucking nowhere, and has actual effort and CRAFT put into the animation, while adding literally nothing to the plot? When was it established that her personality is ANGRY GIRL? What the fuck just happened?

06:00 – The murder attempt aborted, The anime teens and their horrible mascot ride the train to some Parthenon looking building called… TOMETOWN OF THE ANCIENTS. Anyways some vampires threaten them, but then some dork who uses too much hairspray (Editor’s Note: it Cloud) shows up and saves them I guess whatever.

10:30 – Cloud takes the kids to Celes, who’s wearing what APPEARS to be the Funko pop version of Cammy’s outfit from street fighter. Also a CID, but it’s not the Cid who likes rockets and swear words, so it’s the WRONG CID. Anime boy is racist against robots. Anime girl has interesting ideas about English syntax.

19:50 – So I seriously thought it was gonna be a LIBRARY DUNGEON, but instead the official dungeon for this area is some kinda train graveyard. I genuinely like the visual design, with the misty blue backdrop of rusted, decaying train cars in stacks hundreds of feet into the sky. as far as places to wander around and accumulate XP go.

21:00 – Fanboy takes the very reasonable stance that the Train Graveyard in FF7 isn’t in his top 10 locations from the game. Abby calls his bluff, which was a mistake because Fanboy never bluffs.

34:20 – I zoned out for awhile during my listening session, so I’m honestly not sure why the commentary crew is suddenly talking about public urination. I’m willing to concede that the commentary crew is probably right on the basic point that you could learn a lot about someone by how they react to uh.. that. But also, what the fuck no stop.

45:00 – I’m learning a lot about a Magical Gay Vampire Queen? And her cotton candy girlfriend? Good for them.

1:07:45 – This game’s cutscenes keep getting ALMOST good and its FRUSTRATING. 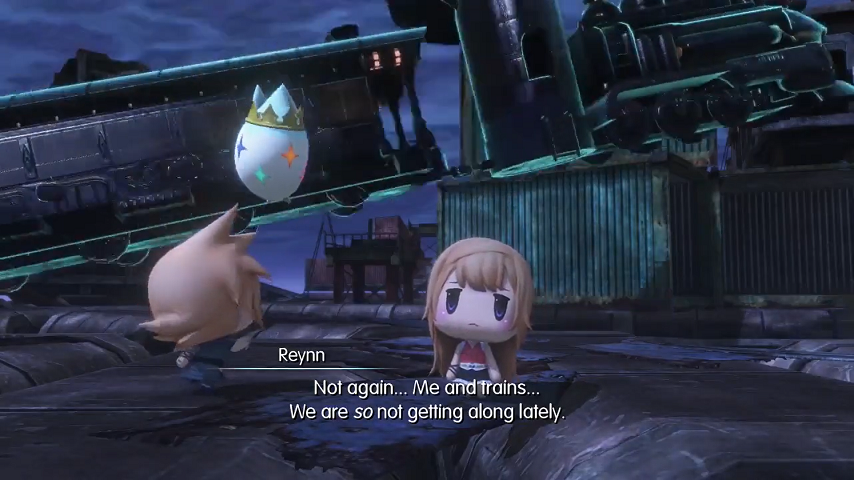 Like I keep going "WAIT SHIT IS THIS GAME… GOOD?" and the answer is always "NO" and it’s starting to get on my nerves.

1:13:20 – For like a good 3 minutes I really thought they were just gonna say "Hahah good thing we killed the vampire before you had a chance to turn since we established that killing him would restore everyone he turned 3 cutscenes ago." That would have almost been clever. Instead they had her turn in the post fight cutscene, and then the vampire is stabbed immediately afterwards, and she turns back. I have NO IDEA why that whole runaround was in the game at all.

1:19:00 – Tometown is much more visually appealing when its not full of vampires.

What actually happened in the plot: The anime Teens ride the Halloween train to Library Land, meet the MOST POPULAR FINAL FANTASY CHARACTER EVER (And Celes (And a fake Cid)) and conclude that it’s time to hunt a vampire. After like an hour or so of dungeon wandering, the sister gets kidnapped, and turned into a vampire for exactly 30 seconds. Then they kill the vampire and she’s fine. Then they go back to library land and get the exposition. Editor’s Addition: And they also obtain the Key of Darkness, bringing the total magical key count up to three out of four.

Next time in World of Final Fantasy: You gonna get wet.

"You hate people!" "But, I love gatherings, isn't it ironic?" Clerks