Chapter 21-3: Back to The Grind
Initial Stream: 11/16/20
Due to my wedding occurring the week of this stream, this write-up is provided by BEAT

00:00 – Alright, that’s a load of stupid sidequests out of the way. Let’s see about doing some PLOT

ALSO 02:00 – So I THINK this is the story’s BIG reveal, as the anime teens are trying to appear serious and the FF7 OC is expositing all over the place. I’m too busy reporting a bot in Gogglebob’s chat to notice. 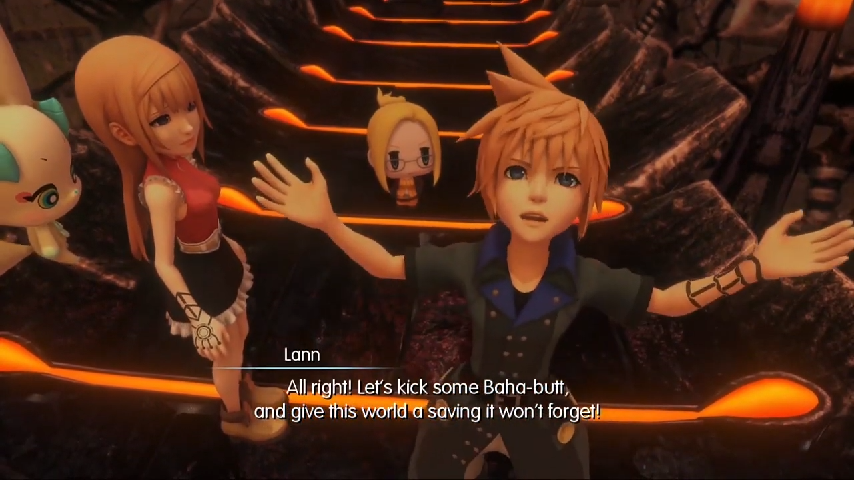 09:00 – I stand by my theory that Roald Dhal became a Children’s Author just to give himself an outlet for his deep-set urge to MURDER CHILDREN.

10:19 – Anime brother just teleported away anime sister because he couldn’t help but try the handprint scanner. He then freaks the fuck out because he thought he murdered his sister. His sister, who’s totally fine, decides to let him sweat it out for a little bit. Anyway that’s how the game tells us this dungeon has teleport mechanics.

18:00 – To all aspiring rappers: it’s okay to sell out as long as you make it apparent you do not give a shit about the product, and are only doing it for the money.

23:10 – Caliscrub joins us! His mic has NEVER worked upon joining a call EVER!

WHAT ACTUALLY HAPPENED IN THE PLOT? Nothing. Literally nothing. The fuck you want from me.

Editor’s Note: Technically, we did learn that Brandelis’s big plot kidnaps his religious devotees and drains them of their life force, Matrix-style. Other than that, yeah, it was just a long walk.

00:00 – You know when we got to the EVIL CASTLE at the end of the last video I sort of assumed SOMETHING would happen. I was wrong.

ALSO 00:00 – Caliscrub regails us with tales of the noise complaint he got from his neighbors. Apparently he got very excited about street fighter and his neighbors were like THAT’S NOT ALLOWED. Caliscrub’s neighbors suck.

20:00 – For a brief moment, we all break kayfabe and admit that we’re actually glad we started this hell project because it allows a regular human connection in these trying times. Then we all dive right back into talking shit about each other and about this game, which is bad.

XX:XX – At some point between the prior timestamp and the next timestamp, we talked about THE WORST WEBCOMIC. I’m not telling you the time, or the webcomic, because I want it to be a surprise.

30:00 – Caliscrub asks if we can tell where we are in the dungeon. We cannot. This game is bad.

40:30 – Oh shit, an actual cutscene! The horrible Mascot character is weak to the aura of the bad guys or something, so it leaves. Thank god.

53:00 – ACTUAL PLOT RELEVANT CUTSCENE TIME! Turns out the dude with the dumb mask and the knight with all the feathers were…

57:30 – …THE ANIME TEENS PARENTS!!! DUN DUNN DUNNNNNNNN!!!!! Oh also we killed them. and froze our older system or our aunt or whatever the white haired lady’s deal is inside a crystal. Like a piece of shit wizard.

1:07:00 – Final boss did that JRPG bullshit where you totally won but once his HP’s at zero he’s like HAHA I WAS ONLY PRETENDING TO LOSE YOU CAN NEVER DEFEAT ME LOL. It’s a bad video game. (Pedantic Editor’s Note: Okay, technically this is Brandelis revealing that he has so much power, he can just Cure4 his wounds as much as he wants. Subtle difference between here and that earlier chapter where he actually was faking. Same ultimate result, though.) This causes Anime boy to crystal the bad guy AND ALSO HIMSELF. Everyone’s dead or dead-adjacent except Anime girl… ROLL CREDITS.

WHAT ACTUALLY HAPPENED IN THE PLOT?: Turns out the Anime Teens caused all the problems. They fixed all the problems, except doing so killed them. Everyone is dead and/or sad. This is the final update, there definitely won’t be any more updates after this one because the game is over forever and ever.

Okay for real, it’s kind of genuinely clever how the BAD END RESET takes the form of Anime Girl basically bargaining with God to get a do-over. Sort of like if the good end of undertale played out in the text instead of just being subtext. 6/10 for being kind of clever almost. Also apparently the COST of getting a do-over was the horrible mascot’s life! So 8/10!

08:40 – Hey it’s our aunt or our sister or our older friend that we trapped inside a cube or some shit. I guess we’re gonna try and be like "Hey… our bad" this time? Whatever. We’re talking about The X-Men Movies. Logan is so fucking good, holy shit.

15:00 – I am forcing you to become aware of the greatest new word. BAHAMUDONK. You have been enlightened. You’re welcome

17:00 – So it turns out the amazing timeline-saving thing we need to do to PROPERLY PREPARE for the final battle so it doesn’t go to hell is… pick all the good end items from a menu. The first one is bad Bahamut or maybe good Bahamut who cares (Editor’s Note: I do! It’s good Bahamut. Bad Bahamut is the final boss.). I’m talking about how the Star Wars Sequel Trilogy fucked up so badly at the finish line it retroactively poisoned the whole thing. Fuck you JJ Abrams.

35:40 – That boss fight took around 15 minutes and Gogglebob was literally sitting on the fast forward button the whole time. This is a bad video game.

39:00 – I got distracted by real-time models of the solar system, which caused Gogglebob to continue into the next bullshit sidequest, dragging out the length of this video. I’m sorry.

AND THEN WE JUST TALKED ABOUT RANDOM SHIT UNTIL IT ENDED.

WHAT ACTUALLY HAPPENED IN THE PLOT?: Anime Teen girl sacrified the mascot for a reset. Then the teens met up with the… relative(?) they killed(??) earlier, and figured out that they have to do a lot of sidequests to get the good ending, and start by fighting visually identical dragons FOR FUCKING EVER.

Editor’s Note: We also learned from Wynne that the twins were known as the “Demon Dyad” a hundred years back, and they commanded the most powerful summons on the planet… albeit poorly enough to be publicly known as “demons”. During this section, we reclaimed (good) Bahamut and Diablos. With Ifrit, Shiva, and Ramuh already on our side, only two more to go!

And special thank you again to BEAT for writing all of this!

What’s next in World of Final Fantasy: Good ending! Everybody dance now!

"If you have an accident prone child, you make him wear a helmet. If you have death prone children, you keep a couple of clones of them around the lab." Rusty Venture