Errr, anyway, in the interest of fair and balanced wankery reporting, I decided to speak to a few real life, no-exploding-clothes women. In particular, I decided to speak to a handful of people that had been playing videogames since childhood, and, of course, puberty. It’s one thing to talk to someone that has gotten into gaming as an adult, but it’s quite another to dig someone out that may have been attracted to 8-bit graphics when they were contemporary. And besides, it’s only fair as, as previously mentioned, I may have had a crush or two on Playstation heroines.

So, while I’m not going to get into names and specific fetishes (ATTENTION PEOPLE THAT ACTUALLY KNOW ME: Ruth has a thing for centaurs. Thank you), a number of women responded with fairly expected answers. Nobody seemed to go for the obviously half naked men (sorry, Mayor Haggar), and, sorry, albino Grecian war gods don’t do anything for the local ladies. What seemed to stick to the memories of these women was predominantly a number of JRPG heroes. King Edgar Figaro might not be the ladies’ man he claims, as Final Fantasy contemporary fugging Squall was named as a crush. Similarly, I’m fascinated that someone named a character from Final Fantasy Tactics (she actually asked me to not even name the character, even if she is anonymous in the article, because, thinking about it as an adult, she was that embarrassed by it), because those guys are barely more than poorly translated chess pieces. And Wild Arms’ Rudy was named, which actually reminded me of my own crush, and I can basically see where this is all coming from.

I mentioned at the start of the week that I had a crush on Princess Cecilia of Wild Arms. See, I was fourteen, and I want to say that I didn’t acknowledge that women were actual people until around when I was sixteen. Before I had my first “real” girlfriend, I pretty much interpreted women as unknowable, ascended creatures that had this whole sex thing figured out and were the eternal gatekeepers of me ever getting to see real, live nudity. In short, I hadn’t yet discovered that everybody poops. And, really, video games didn’t do much to divorce me of this notion, as “developed” video game women were magic warriors (Terra/Celes, FF6), manic pixie dream girls (Marle, Chrono Trigger), or cats (Kat, Breath of Fire 2). Cecilia, literally from her introduction, is a magical princess, yes, but she also falls asleep in class and is known as the gluttonous “burger queen” by her classmates. In other words, in a weird way, she’s “one of the guys”, and… well, I’m just saying if we ever hung out, I’m pretty sure she’d be in to me.

And it’s fascinating to think about that line of thinking from the other side of the sexual seesaw. Videogame women were generally warrior queens or male accessories, but the men in these stories were supposed to be player-inserts. Revisiting Rudy Roughknight of Wild Arms, we’re talking about a guy that literally has maybe three lines of dialogue. He’s almost an entirely mute protagonist in his starring adventure, and, spoilers, he’s not even a damn human. But that doesn’t matter. What matters is that he’s well developed enough to have a general personality and life, but you’re allowed to fill in the blanks on the finer points. For boys, this means that you too can imagine yourself as a heroic adventurer, and for girls, you too can imagine Rudy as your ideal boyfriend. What? You want to be an adventurer, too, girl? No, we already have a woman filling that blank. Please move along.

I’m going to give the designers of any number of JRPGs the benefit of the doubt on this one, because it (theoretically) wasn’t misogyny that made Rudy the ideal boy, it was simply a need to appeal to a boy-based market. JRPGs often follow the same tropes as shonen manga because they’re both trying to garner that same audience, and half the tropes there go back thousands of years as “boy stories”. In modern times, we may have gotten past “Princess Peach needs rescuing” but it’s still hard to ignore the glut of fictional women that appear to exist exclusively to entertain the male protagonist. But since those male protagonists are supposed to be audience inserts, it’s easy for the audience to ascribe any traits they’d like to Male Hero #3,214. Rudy would totally hang out with you and talk about One Direction all night long. He’s a huge fan!

That is something I, a heterosexual male, understand. What I don’t understand is how this kid popped up in a number of responses…

Okay, to be clear, before we go any further, anyone that mentioned they had a crush on Sora of Kingdom Hearts distinctly noted that it was at a time when it would have been roughly age appropriate (again, surveyed women that grew up playing videogames). Additionally, pretty much everyone I spoke to knows about my online activities, so there may have been a little bit of audience bias going on there. Or maybe they only read the site in the first place for the Kingdom Hearts articles. Oh dear… I don’t really want to consider that. Regardless! What’s important is that a handful of grown-ass women admitted to, at one point in their lives, having a crush on a kid who palled around the universe with a talking duck.

And… I’m not judging, I swear. I’m pretty sure I was into the Sailor Moon because the boom anime babes make me think the wrong thing, but… Sora? For some ridiculous reason, I’ve been up and down with Sora’s biography, and there’s nothing interesting there, right? He’s a common kid from a common town/island/world thrust into extraordinary circumstances where he consistently does the right thing and looks out for his friends. He’s practically a blank slate! He’s practically…

Yes, he’s another general sketch of a male character, and you’re free to imprint whatever you want in there. If you want to be a boy hero, here you go. If you want to have a digital boyfriend, that’s fine, too. Heck, if you want to imagine Sora is gay for Riku, that’s completely allowed, and generally supported by so much potentially homosexual hugging. Like… so much. I have these sketches here…

But what’s the conclusion here? Some tired tripe about women preferring well rounded characters as opposed to the men that just want roundness in other departments? I mean, I guess that’s kind of true, but, again, we’ve got crushes on silent protagonists here. Women don’t go for “beefcakes” like men go for “babes”? Again, a little too obvious. Chicks dig Nomura pretty boys? Okay, that’s a distinct possibility…

No, I don’t think there’s some gender split moral here. There probably isn’t any moral here (thanks for reading!). If anything, this just goes to show how “wankery” works. Maybe you get turned on by crazy Native American rape. Maybe you’re all about half naked women cooking. Or fighting? Or bathing in spit? And maybe you’re going for the men, but only men that hit the proper level of story definition. It doesn’t matter. It’s all wankery. Whatever floats your boat. It’s cool, as long as you don’t obsess or try to reenact some of the… well, practically anything from this week. Please don’t tie women to cacti, and don’t force men into yellow, floppy shoes.

Huh, we didn’t really have a dedicated game for this entry… kind of messes with the format… Wait, I know!… 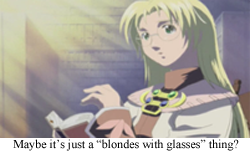 "Don't blame me. Blame yourself or God." Delita Hyral