Behold the agony that is caring for something.

I’ve always loved Dragon Ball Z. It was “precious anime” in a time when the only alternative available on a weekly basis was Sailor Moon (which I also loved… but it was for girls… right?), and, even as Pokémon blew the doors off the import market, I always followed Dragon Ball Z. Why do I like it? Because… I have no idea why. I suppose it’s the same reason I follow comic books: I like the characters, and, even though I know in my heart that there is absolutely no tension (do you think Goku is going to power up just in time to stop this overwhelming force?), I just… I just want to see how Krillin is doing, you know? Akira Toriyama designs some interesting/shallow characters (and I’ve got the tattoo to prove it), and, yes, I feel like I would like to know exactly how that android became a park ranger. Even when the plots spiral completely out of control (did… did everyone on Earth just die? Again?) and four characters combine into two characters and then one guy eats the other one and… Oh, never mind, you’ve seen the show, right? It’s DBZ. It’s crazy. Maybe that’s all it needs to be.

And, given the sheer scope of Dragon Ball Z, it’s easy for the average fan to get… shall we say “caught up” in the fiction. Goku’s battles may be technically straightforward, but there are also 291 episodes involving the minutiae of power levels, multiple warring factions, varying galactic civilizations, and an ever-present need to account for the four star dragon ball at all times. You could teach an entire class on the various forms of the average saiyan, and follow it up with a lecture on the socio-politico ramifications of the universal rule of Frieza. And is Vegeta the greatest hero ever, or just a huge asshole? Does deliberately exploding in the name of good absolve you of your sins of committing galactic genocides? And that’s all before you even get into the auxiliary materials, like trying to wedge the movies into a proper timeline, or debating whether or not GT is at all canon until the heat death of the universe (which may be caused by Goku). And the kick of it is that, until the fairly recent release of Dragon Ball Super, the DBZ series was done by the time it hit our shores. Even GT was pretty much out the door by the time we were fooling around with the Playstation, so this wasn’t even a “living” franchise, it was just nerds debating the particulars of a series that seemed to already bore its very creator.

It was likely this “Dragon Ball is dead” problem that led to a complete lack of decent DBZ games on our shores. Goku made his way to a number of systems in Japan, but, over on this side of the Pacific, all we had up through the Playstation was one Dragon Ball GT game that was… confusing. Released before the Frieza Saga had completed over here, attempting to decipher why Vegeta was now a monkey, a different color, and also known as “Baby” was… a little confusing. And that was before you even got to that chirping pink dude named Buu. Likely due to said confusion, Dragonball GT for the Playstation 1 didn’t exactly set the world on fire, and became a rare “forgotten gem” of the system. Or maybe it was only a gem for anyone that didn’t actually play the game, because it kinda sucked.

But we finally got a “real” Dragon Ball Z game in 2002, Dragon Ball Z Budokai. And it was good! Well… that might be a stretch… It was passable! It was not bad! Or it was not bad enough that I particularly noticed how bad it was! Hooray! Look, it was exactly what we wanted for years: an opportunity to play through the story of Dragon Ball Z with all our favorite characters, and then, when that got boring, an opportunity to see Cell fight Frieza and then kill Yamcha. It was canon and dream match all in one, and, while the gameplay wasn’t all the exciting, it was what it needed to be. You could fight as any one of many Gokus, and then conquer the universe through the amazing power of blondeness. And there was a vaguely JRPG-esque equipment system, too, so you could pretend like numbers go up was the point. Something for everyone!

So, naturally, DBZB got a sequel… and then another sequel… and then a whole new “rebooted” franchise with a new developer… and that got a sequel… and then we made it all the way to Dragon Ball Z: Budokai Tenkaichi 3. This would be 2007, and, if you’re paying attention (and I’m making sense), that means we had six Dragon Ball Z games in five years. From famine to feast! And, unfortunately, while some could likely tell you the exact differences between each title, to an outsider, this was basically five years of releasing new revisions for Street Fighter 2. Just replace Dee Jay with Android 8, and you have the basic idea. Yes, there was that “reboot” in there, but this was still the same characters and same plots and same “just keep hitting punch” gameplay, and, let’s be honest, DBZ was never Ibsen. Throw in all the what-if stories you want, it’s still just dudes punching each other until Goku shows up to really punch everybody.

As one might expect, I was kind of burned out by the release of DBZBT3. If memory serves, I didn’t even buy this game when it was remotely new, and simply fished it out of a clearance aisle somewhere in my travels. After years of other shallow DBZ games, I’m pretty sure I gave it a precursory play, enjoyed a few versus matches with the AI, and gave it up forever. I’m almost certain I didn’t play the game with another human even once, which, for a DBZ fighting game, is fairly damning. Sure, this title has more characters than any fighting game ever, but they’re all the same. And when you’ve got “Unnamed Frieza Henchman” on the roster, you’re scraping the bottom of the barrel (a barrel that, incidentally, once contained giant monkeys).

So when ROB rolled this game, I figured I’d just play a few rounds, write a few thousand words on silly DBZ facts, and go grab some ramen (DBZ has a tendency to make me hungry). And the plan was moving along swimmingly until I decided to check the Gamefaqs “cheats” page. May as well see if I’m missing anything, right? Well, considering I had unlocked nothing in this game previously, I stared at the list of the characters I could be using if I just put in a little more effort. General Blue of Dragon Ball! The Pilaf Machine! Evil King Piccolo! Vegeta’s dad from the planet Vegeta who is also named King Vegeta! Spike the Devil Man! All I have to do is put in a little effort, and I too could be playing as Spopovich (you know, that one muscular bald guy? Not Nappa)!

But… I know it’s a lie. I know that I’m not going to play this game again, and any “achievements” would retreat as soon as I removed that disc from my Playstation 3. I know there is inevitably going to be a better, more improved DBZ game in short order (note: I am not talking about any particular game at this moment, but they keep happening). And, most of all, I know that I’m not going to play this game with anyone else, so these unlocked characters are exclusively for my own masturbatory enjoyment. And it wouldn’t even be for that much satisfaction! All of these characters play practically the same, and, while I acknowledge there are differences and “unusual properties” involved in the creation of these fighters, I’m certainly not going to put in the time to learn the intricacies of 98 characters in 161 forms. I wasn’t going to do that when this was the latest n a deluge of DBZ games, and I’m not going to do it now that it’s a decade later and outdated as hfil.

But the drive is still there. There are fighters to unlock… and I want to unlock them. I need to unlock them. I’m a Dragon Ball Z fan! How could I turn down the chance to play as every stupid version of that stupid monkey man that won’t stop endangering all of his stupid offspring? How can I still call myself a man after ignoring the cast of OG Dragon Ball in favor of that spiky dragon from GT? What kind of monster have I become that I won’t unlock the Ox Princess!?

Spoilers: I narrowly resisted wasting any more time with this franchise. And, in my heart of hearts, I know that’s only because there are some other games I want to play right now. Heck, I’d argue that the “three a week” format of the FGC is there entirely because… Well, because of this game. Sorry, Mercenary Tao in Cyborg Form, I’ve got places to be, no time to play with you now. Go save and/or destroy the planet on your own time.

So, anyway, if anyone knows a way to rewire my brain so I care about completing things that actually help people, please let me know.

What’s next? Random ROB has chosen… Kirby & the Amazing Mirror for the Gameboy Advance! Eight angry eyes, all staring back at you! Please look forward to it! 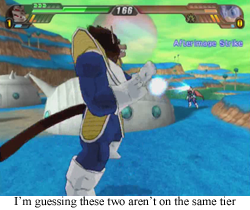 ''A sense of humor is the measurement of the extent to which we realize we are trapped in a world almost devoid of reason. Laughter is how we release the anxiety we feel at this knowledge.” Dave Barry