Previously on Wild Arms 2: Tim was nearly sacrificed, and Ashley was nearly exploded, but it all wound up working out in the end. Now ARMS has a pair of pretty significant victories under its belt. Odessa is running scared!

And the king noticed! The king!

King of Meria Boule list of accomplishments making him worthy of position of king: was born.

Down to business: how can we get our own rad plane?

The United Nations of Filgaia.

Meria Boule is here, Sylvaland was that spot with the queen and an entire kidnapped village, and Guild Galad is the country with all the cool tech. Guess which one we’re courtin’?

How about that completely empty, entirely isolated prison from a while back? I mean it’s not the classiest place in the world, but I feel like…

What? No! That’s a terrible idea! That place was infiltrated and nearly destroyed hours ago! How is this even an option?

They could have more than one exploding toad!

We now cut to the Summit already in progress. Let’s meet our world leaders…

We’re off to a boring start!

We’re basically in the same spot as we were with the Queen a little while back. Guild Galad Master is not fond of giving ARMS free reign of the planet.

GGM… ain’t wrong. One has to wonder why more JRPG countries don’t just pump out an army instead of relying on like six random people.

But literally everyone else at the table has been saved by ARMS at least once, so kind of a bias here.

Reminder: by “skill”, he means “we’ve got the weapons”.

The Treaty of Iscariot is mentioned. This is a random bit of Filgaia legislation that basically says no one is allowed to have crazy powerful lost technology. I’m pretty sure ARMS is violating the treaty every time they whip out their arms.

This is never good.

Who would have expected Odessa to attack the same place twice! Within 24 hours!

But, sure, they’re all just that confident in ARMS.

Auxiliary mission! Get our close combat asses launched over to the enemy ship, destroy it, and then scoot on home. Easy peasy.

Launching an assault anchor through their hull won’t be enough to bring it down?

Just another hidden compartment on our flying castle.

Get ready to puke!

Nice little hole we ripped in the place.

And Lilka is burped out first.

The rest of the party calmly saunters out, because they had their tray tables up, and their seats back in the full upright position.

Let’s restate our life goals: blow the place up…

… And make it home safe. No more showboating, Ashley!

Yep, guess this ship is going to be just fine with a giant tethered anchor stuck in its hull.

And now for hallways! And enemies!

And random obstacles that must be kicked to death!

And a save point! Yay! Note that this is our first save since the memory lady back before three consecutive boss fights. Also note that we have not been granted a break since Tim started his trial two updates back. Hope you brought supplies!

Oh, we kinda glossed over having a full party for Tim’s trial, but this is the first dungeon where we can truly pick whoever we want for battlin’ times. Wild Arms 2 is nice in that you can switch your party at any time, inside or out of battle, and it won’t impact your “party leader” and switching around characters for tools/solving puzzles (take note, Breath of Fire 3). Generally, I would recommend Tim being in the party, as he’s the only character that distinctly gains abilities through being involved in battles. Everybody else just gets normal EXP, and, yes, EXP is shared with inactive members equally.

So our dungeon du jour has one main hub area, and three distinct goals. We’re going by Darksiders rules today, apparently. We just came out of one hallway, now let’s check the first of the other three.

This pathway is a little… laser-y.

Maybe we can check if there’s something before the security system.

A puzzle! Kinda! Just have to move a box into place to reach that console.

Turn off barrier, turn on terminal switch. Nothing too complicated.

Now we don’t have a barrier, but there are always monsters about.

Every encounter on this ship is against groups of Odessa Men. It’s thematically appropriate… and boring as hell.

But I’ve got a theory about that. See, in Wild Arms 3, there were these things called EX Keys, and you got them for 100%’ing various parts of the game. One EX Key was awarded for completing the bestiary, and another for finding every treasure chest in the world. Now, to my knowledge, there is no similar reward system in Wild Arms 2, but I think one was intended at one time, as there are no treasure chests in areas that can only be visited once (or at least no treasure chests that are not mandatory), and the enemies in these areas are practically required fights. I suppose it’s possible to never fight a “random” battle aboard this ship, but it is unlikely. The whole thing gives the impression that there was once a 100% completion reward for Wild Arms 2… but it didn’t wind up making the final cut. Oh well. At least that’s one excuse for these extremely repetitive battles.

Anyway, next room, time to flip some more switches.

These switches would be more interesting if you somehow had to navigate and switch switches at particular times, but it’s mostly just “open door yes/no”.

Write that down! Actually, fun fact, now that it is THE FUTURE, I just took a picture with my cell phone so I would have the code handy later. Way to go, technology.

Look, this might not be the real answer, but Brad can walk across it just fine.

Final room of this area, time to press another YES button. 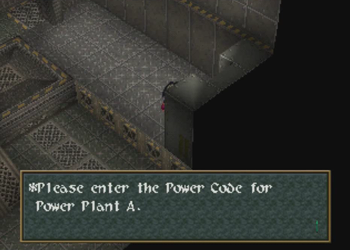 And now we enter that code.

It’s not just multiple choice, there are plenty of possible ways to get this one wrong.

Nice! 33% done! Let’s walk back to the hub and fight the same stupid three guys a bunch again.

Branch B in this automata.

The goal is to drag the blocks into place to “overload” the elevator area. You can push and pull at will, so there isn’t any risk of trapping yourself.

And now we’ve got a platform.

The next room is quite the pain. Take careful, baby steps across these catwalks, as they fall apart instantly. Your only recourse is watching closely for visual cues, as even floating Pooka over the bad spots won’t give you any warning. And if you fall, it means more walking.

Almost to the terminal we need and… Dammit.

There are two terminals in this room? Neat.

Double back to the elevator room…

Get the power plant code…

Fall 7,000 times because the floor resets every time you leave the room…

Oh, this! Sometimes you’re not only ambushed, but also ambushed with only one party member. And it’s always Tim, because Filgaia possesses capricious gods. After a round or two, the rest of the party will show up, but, in the meanwhile, it’s rather tense.

Also, I don’t know if it counts as a party wipe if a solo party member falls… but I’m not anxious to find out.

Okay, now we braved the scaffolding again to reach that second terminal, and it’s time to shut this sucker down.

Power Plant B is the worst. Let’s hope C is better.

Route C is looking a lot like Route A so far.

This isn’t a puzzle, but an incredible simulation. Just kick over these capsules, and walk on through.

Anybody catch a pattern to these codes? I’m seriously asking. I’m pretty sure they’re just nonsense, but I think they are consistent between games.

Another hallway where we just blow stuff up? Kind of boring, but after the B path, I’ll take it.

There is a little more to this area, as you have to flip a switch from a distance, so break out the Pooka.

Welp, that was easy. Guess it’s time to head back to the anchor and blow this popsicle stand.

Run, do not walk, to the nearest exit.

Lowering himself on an elevator we didn’t even know was there is that dude with the helicopter rotor for a weapon.

What gave it away? Was it when we trounced every other soldier on this ship?

It’s a battle of ideals, man.

Ptolomea has no time for your semantics! Not like there’s some god of absolute justice in this world. Who is also a robot lion. Nope.

Guys, are we going to fight, or what?

…. Nobody here actually wields a sword.

Boss fight! Because Ptolomea already got his intro some time ago, we don’t even get a cool GIF out of the deal. So have a GIF of his rotor blade rotoring along.

Ptolomea doesn’t really have any new or exciting attacks, and ARMS has leveled up a bit since their last fight, so this rematch isn’t really much of a match.

Everyone now has summoning abilities, Tim has First Aid, and Ashley can transform into the living incarnation of destruction. Ptolomea won’t last long.

The only real hassle here is that, if you’re paying attention, we’ve been through six separate boss fights since our last “refill”. We don’t have to worry about MP, but I bet Ashley is good and out of bullets at this point.

Ah ha! Ptolomea has a heart of gold… when he’s not involved in murder missions.

Basically, Ptolomea was sacrificing himself, distracting the enemy, and granting the rest of the Odessa nerds an easy escape while ARMS was battling. That crafty/noble Ptolomea!

Oh, also because he’s going to let us drop out of the sky. Still crafty!

Always an excuse with these guys…

Pretty much how it goes with this group.

How could we have not foreseen this? Does ARMS not understand gravity?

“No, you’re supposed to get in the anchor, then we pull it back. Ashley, do we need to review the plan again?”

“Can Tim summon something that flies? Maybe some kind of… parachute guardian?”

Are we supposed to swim?

So we have to find the cockpit. Did anyone notice one earlier in the update? No? Dammit.

This place is only slightly on fire, we should be fine.

Lilka, when was the last time you were actually helping?

Hey! Brad’s got this!

That was the plan!

Aaaaand success! Yay! (Also, no one felt like animating the actual landing.)

Ashley blames his survival on the energy of our younger members. I don’t know, I feel like maybe you should be thanking Brad who actually landed the plane.

We nearly die, the king has a good laugh.

Guess the Guild Galad Master got the message on “don’t mess with ARMS”.

Is… this how diplomacy works?

Gee, Irving, what keen insight you have.

Why is everyone Sir Mix-a-Lot all of a sudden!?

And those spoony cowards gave us a hovercraft for our trouble. Nice!

ARMS Mission #11:
Protect the Global Peace Summit / Wreck up Odessa
Status: Success on both accounts!
Notes: Ashley somehow found a way to fall out of the sky again.

Apparently the ol’ Odessa craft contained some data tablets (hard drives?), and they could come in handy. Hop in your sweet ride, and find ‘em!

Newest fetch quest, got it!

But we’ll get to that next time. Ashley needs to air out his jacket. It smells like burning metal at the moment for some reason…

Next time on Wild Arms 2: The Guardians punish me for my crimes.

"Time forks perpetually toward innumerable futures. In one of them, I am your enemy." Dr. Stephen Albert