Super Mario Sunshine is the story of Mario, Princess Peach, and her entire entourage taking a well-deserved vacation at The Isle of Delfino, a vacation destination apparently appropriate for royalty and a national hero (but not Luigi. Never Luigi). As is usually the case, there’s trouble afoot: Bowser Jr. is disguised as “Shadow Mario” and mucking up this normally sunny island paradise. Mario gains sentient water gun FLUDD and vows to run all over the island and clean up the mess.

But is Isle Delfino worth saving?

One of those great conceits of fiction is being “told” that some thing is the greatest. Karen has written the best book ever, and everyone in the world loves it, but you, the viewer, only ever get to see a sentence or two. The story of a fictional band’s rise to fame is catapulted by an impossibly catchy single that the real audience never gets to hear. We see it all the time without even skipping a beat.

So here’s Isle Delfino, a vacation destination, we’re told, that is so amazing it’s fit for not one, but two royal families simultaneously. Mario, and by extension, the player, has free reign of Isle Delfino during the cleanup project, so, even though Delfino might not be at its best during your visit, you do get to see every nook and cranny of the isle. According to the in-game map, Mario even has access to every last “tourist trap”.

So would Isle Delfino be appropriate for your family vacation? Let’s take a look.

Transportation
We’ve got the Delfino Airstrip, which only seems big enough for a single seaplane. Being cramped into some puddle hopper is not the best way to start your vacation. Then we’ve got transportation around the island, which is… lacking. There are gondolas floating about here and there, but I’m pretty sure the kiddies are going to be bored out of their little heads mindlessly bobbing from spot to spot. And it appears that cars, cabs, jitneys, and tramcars are just right out. These roads are barely wide enough for a plumber, so get used to hoofing it from place to place. Bring comfortable shoes. 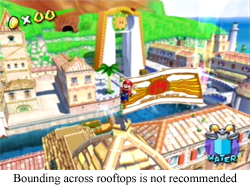 Shopping
All shopping can be done at Delfino Plaza. Do you like fruit? Well we’ve got lots of fruit! Do you like shopping for anything else? Well, tough pineapples, you’re stuck with fruit. And you better believe customs ain’t letting you take any of that home. Also, there are approximately, what, a total of ten stands? At peak times, you’re going to be stuck waiting in line forever for that durian. And you just know Toadsworth is at the front of the line, holding everyone up with his endless harrumphing haggling. Just buy the damn papaya and be done with it, old man!

Local Color
Here’s a tip for all tourists: the locals hate you. You might see yourself as some kind of foreign, benevolent genie to these native people and their strange and primitive culture, spreading your American Money around and boosting everyone’s spirits, but, no, that is decidedly not how the locals see you. You are one of two things: a mark or an annoyance. To everyone below a certain income level, and particularly the youth of an area, you’re a walking, leaking moneybag that needs to be shaken in just the right way to see precious lucre dribble out, and nothing more. The rest of the population, generally the adults and people who can comfortably afford to live year ‘round in “paradise”, see you as something akin to a human-sized gnat: an overly large, buzzing irritation that makes a usually twenty minute trip to market last two hours because all of you people decided to clump up and forget how to purchase a banana.

The local Piantas are no different. Hell, we’re talking about a group of people that arrested an international hero about three seconds after he got off the boat. Sure, they act friendly, but that’s just the Piantas hoarding coins to acquire those imported green mushrooms. Visit Pianta Village at your own risk, less you get hurled from some massive mushroom and into the abyss.

Lodging
Sirena Beach is home to Hotel Delfino, apparently the only Hotel on the island. Unless you’re a big fan of “rustic”, you’re going to be stuck paying exorbitant rates and booking years in advance for the only game in town. Speaking of games, Hotel Delfino has a casino, which is definitely a plus. A significant minus, though, is that the hotel is very, very haunted. Ghosts aren’t normally much of an active issue for most people, but it does raise an alarming number of questions. What happened at Hotel Delfino to inspire so many angry spirits? Could it happen again? And what’s with the red X’s painted on the walls? That is paint… right?

Your rural alternative is Bianco Hills, offering some very cozy villas in the shadow of a number of windmills. Here’s another travel tip: the concept of rentable cabins is code for “if anybody from here actually wanted to stay in this spot, our ancestors would have built real houses here centuries ago”. You get to stay by the lake with the sashaying sentient cacti, and we’ll be back at home with the non-homicidal mushrooms. Feel free to use the lake for fishing, we’ve nearly exterminated the piranha population.

Industry
Isle Delfino doesn’t have to just rely on tourism, as it contains a booming shipping port at Ricco Harbor. This is great for Isle Delfino’s residents, but maybe not so great for visitors. I can’t imagine the joy of finally securing a room at Hotel Delfino, only to be awakened by a tanker’s bullhorn as it pulls into port at dawn. There’s also a juice bottling plant in the area, which, assuming it’s low on emissions, isn’t too terrible… until you remember that this kind of thing attracts the unique, tropical, water-solvent Yoshi tribe. Which horror would you like to explain to Little Timmy: “Yes, Timmy, all of our food and possessions have been eaten by a rampaging lizard,” or, “Sorry, Timmy, sometimes loveable dinosaurs just dissolve into oblivion on contact”? Either is a conversation you get to avoid when you just go to Disney World, where enchanting characters rarely die screaming.

Natural Wonders
Noki Bay is a wonderful natural cove perfect for scuba diving and observing a waterfall that would put Niagara to shame. There are also no guardrails. At all. But you can balance yourself across tightropes to perfect vantage points that are incidentally moss covered rocks. This is as good a place as any to note that there appears to be absolutely no hospitals anywhere on Isle Delfino, which may be a blessing, as we have no idea what a health care system would even look like when it’s run by a bunch of creatures that evolved from palm trees. Hope nearby Cancer Island (official motto: “Like the crab!”) has a few medevac helicopters available, or remember to buy a family-set of helmets before leaving home.

Corona Mountain is also available for any budding volcanologists in your troop. Let’s see if there’s any…

Let’s Go to the Beach!
The previously mentioned Sirena Beach is probably your best bet, as it’s easily within walking distance of your only viable lodging and a juice bar (and if you can remember the shape of a Gamecube controller, you’ll never get lost), but Gelato Beach is also available. Gelato Beach certainly has more space than Sirena Beach, which is a boon during the peak season, but it’s also downwind from giant, grassy cliffs. I’ll forgive you for not being a beachologist (not a thing), but that kind of geography generally leads to a grand number of critters infesting the beach, like raccoons and wigglers. Also, nearby cliffs are just perfect for an overeager high tide to completely decimate any and all tanning locations. So, all in all, it’s a great beach, but only if you hit it at the exact right second when it’s not overcrowded, swarming with vermin, or washed out. If that all works out, here’s a gentle reminder to roll into that Hotel Delfino Casino.

Rides
Pinna Park is Isle Delfino’s premium amusement park. Accessible only through cannon (!), Pinna Park boasts upwards of ten or so rides that are sure to entertain the kiddies for maybe a half hour before they whine about never wanting to ride the stupid clamshells ever again. And then it’s time to cannon on back to the mainland, because this park is teeny tiny, and you can’t just sit around eating popcorn for the rest of the day. It seems like a theme park would be a shoo-in for innovative ideas in Rosalina’s Universe, where even the regal Princess Peach has an elaborate secret slide hidden in her castle, but, no, a couple of whirligigs and a roller coaster, and those lazy Pinatas called it a day. Salvage fun for minutes at a time at Pinna Park!

Book your trip now!
Or don’t. Isle Delfino might be a neat spot for an adventure, but you’re going to get nothing but whining from your imaginary backseat the entire time you’re there. Sure, the theme parks and beaches sound appealing, but they’re just not made for a relaxing time. Know what might be fun? Why not hit Dinosaur Land? At least they’re not putting on airs. You know where you stand with Reznor.

What’s next? Random ROB has chosen… A Boy and his Blob. NES or Wii version? Well, grab some jellybeans, and find out in a couple days. Please look forward to it!

"When you're at war, have no mercy. But when you're not, show no hostility." Howard Anthony Stark