It is time to turn the crank on the giant machine that says “Let’s Play”; And I am doing that on August 22, Chemistry Day. My hypothesis was that mixing red wine with white wine would produce rose wine, but for some reason it didn’t work out that way. So, I gave up on my experiment and started whining instead.

Previously on Wild Arms 3: Slickster, that bugger, was stealing the guardian’s life force. The guardian was being eaten alive.

Clive asks what this “signifies”, and Gallows is taking it personally that the rest of the party isn’t outraged.

Gallows, it is okay. A dude tries to slay one of your gods, you are allowed to get upset.

What we know: bad guys are bad.

Go ahead and check out the last update, because…

Clive, I get that you think you’re being smart here, but “Slickster” literally confirmed he was working with Purple Robes Woman when he named her and said, “I am working with her, dummy”.

Virginia has had a long day, so she’s going to ignore Jet’s usual nonsense today.

That always works in JRPGs! 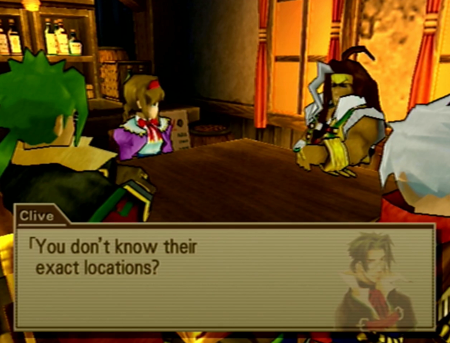 END_OF_DOCUMENT_TOKEN_TO_BE_REPLACED

This is being posted on Gogglebob.com on July 18, Brick Day. Like the many shades of flesh, bricks also come in many colors. I think the description, ‘Wearing a brick-colored jacket’ on this wanted poster of Janus is a poor choice of words.

Previously on Wild Arms 3: Virginia conquered depression, a titanic turtle, and about half of an ancient tower. She’s probably going to cure cancer and repel Satan during this update.

So let’s climb on up to see what the rest of this tower has to offer.

Since Jet was the only one that got to climb previously, if you are some kind of sprite maniac, you now have the opportunity to see how everyone in the party looks when climbing hand over hand.

This room is pretty straightforward, but the way the grates/”towers” are arranged mean that you will have to double back a few times if you want to hit all the treasure chests.

I would say the grate treasures are… great. Revive fruits are going to come in handy during the inevitable upcoming boss battle.

END_OF_DOCUMENT_TOKEN_TO_BE_REPLACED

"Ah, good taste, what a dreadful thing! Taste is the enemy of creativity." Pablo Picasso